Specialties that are disappearing back home still thrive in “New Iceland.” 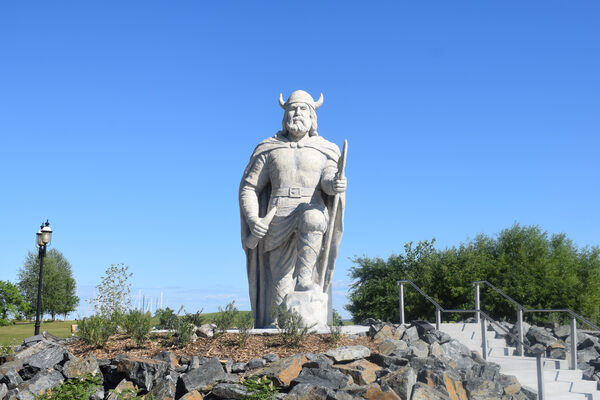 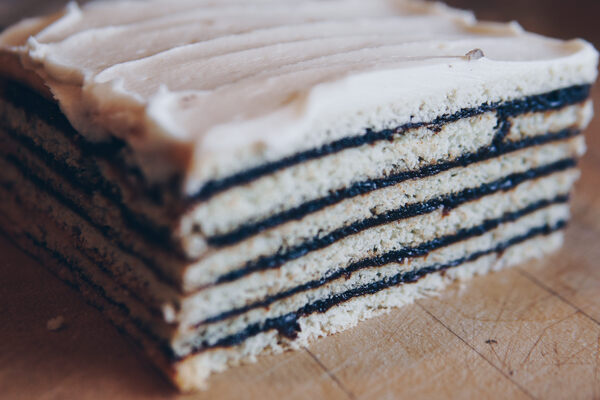 IN A KITCHEN ADJACENT TO her general store, Donna Austfjord mixes allspice, cloves, salt, pepper and tender quick meat cure, then spreads the mixture between pounded pieces of lamb flank. She is fixing rúllupylsa, a traditionally Icelandic dish. She will not smoke the meat and press it between two boards, like Icelandic fishwives once did, and her spices only approximate the old recipe’s herbs such as arctic thyme and yarrow. But it’s still remarkable. After all, the Italy-based Slow Food Foundation has listed rúllupylsa as endangered, citing the declining number of Icelandic producers and farm families making it.Austfjord, though, does not live in Iceland. She lives in New Iceland: a remote region in Canada where, on the shores of Lake Winnipeg, rúllupylsa is relatively abundant. In Gimli, the biggest town (population 4,000), the local branch of a national grocery chain sells it. When a Thai family took over another general store, they made a point of learning to make rúllupylsa. They sell it alongside pad Thai.It’s one of many Icelandic specialties easily found in the area. Brennivin, a potent Icelandic liqueur, flows freely at bars, and the local pizza joint is named Brennivin’s Pizza Hüs. An ice cream stand sells sundaes named after the ice-covered Icelandic volcano Eyjafjallajökull. The shelves of Austfjord’s General Store are stocked with Icelandic dried fish, Lakkris (licorice candy that Icelanders love), and homemade slátur (a kind of Icelandic haggis) and crepe-like pönnukökur. When I visit, Austfjord is preparing skyr by straining buttermilk whey through a cotton bag she’s sewn—all according to a recipe handed down from her mother. It tastes velvety, rich, and tangy.Iceland is aware of New Iceland. Last summer, Austfjord reckons five busloads of Icelandic visitors stopped by her store. She also met the new Prime Minister of Iceland, Katrín Jakobsdóttir who was in the area visiting. 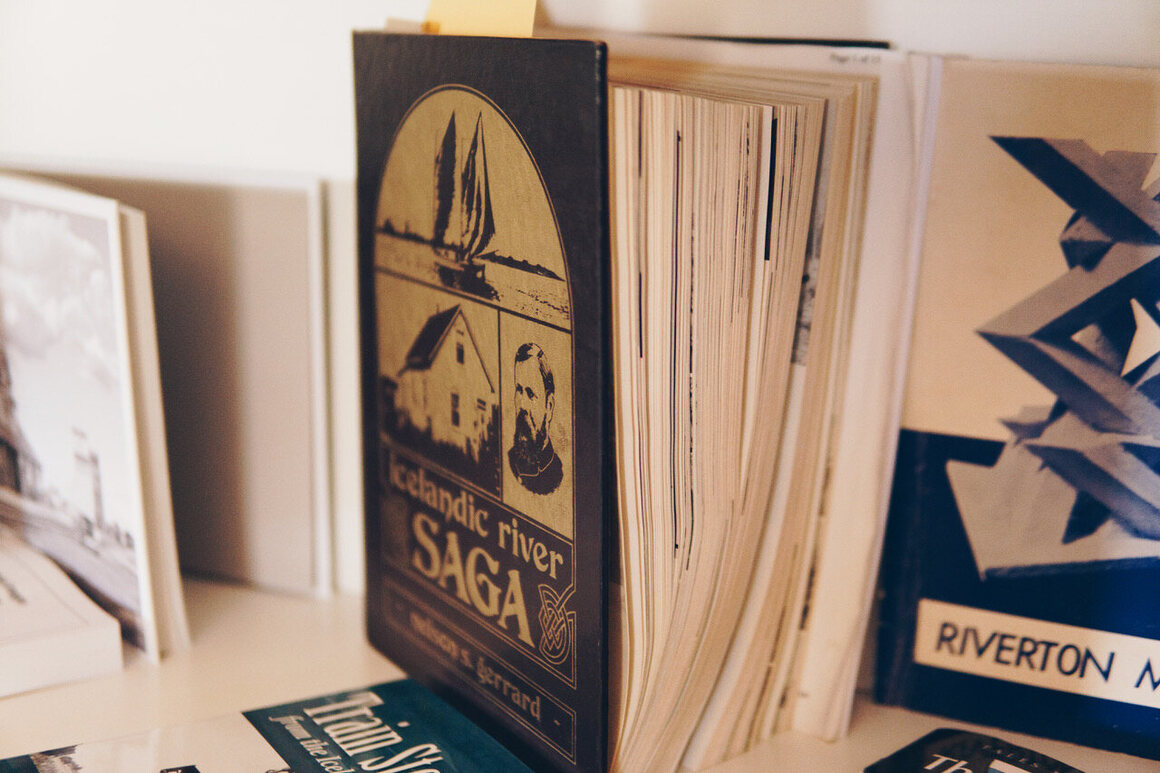 A large immigrant community has made their cuisine popular.READ MORE 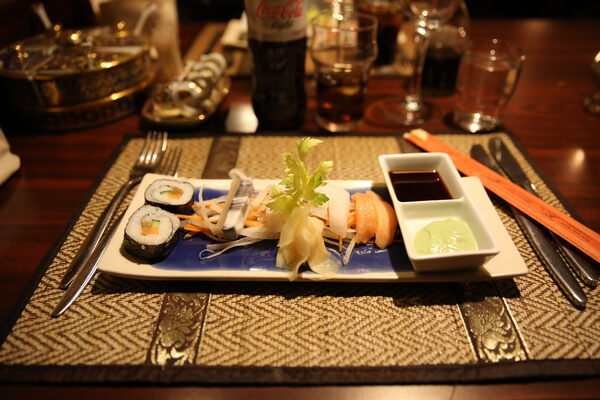 The origins of this delicious diaspora are explosive. Following a volcanic eruption in 1875 that starved livestock, crippled the economy, and punctuated an ongoing series of hardships, Sigtryggur Jonasson, who had recently arrived in Canada, traveled home with a booklet titled Nýja Ísland I Kanada, or New Iceland In Canada, which Canadian officials wanted to distribute as part of an effort to attract immigrants to the lightly populated area. Over the next few decades, some 20% of Iceland’s population emigrated to North America, mainly to Canada. Jonasson became known as the Father of New Iceland, and Icelanders eventually settled, by being towed on flat boats, on Lake Winnipeg, where they hoped to fish and govern themselves in the remote territory. They named the capital of New Iceland Gimli, Icelandic for “paradise.”But it wasn’t quite. Even hardened Icelanders weren’t prepared for the cold winters, and many died from scurvy and a smallpox epidemic during the first years. According to Stefan Jonasson, a Winnipeg-based New Iceland historian and editor of the community newspaper Lögberg-Heimskringla, at least one setter stored bodies in cold sheds until spring thaw when they could be buried. The newcomers survived in large part thanks to First Nations people, who taught these ocean-fishing immigrants how to set a net four feet under the frozen lake’s ice. The bond formed between First Nations and Icelanders persists today—intermarriage was common, as well as culinary exchanges. Many nearby First Nations families still make Icelandic dishes. “First Nations also taught New Icelanders how to smoke goldeye fish (an iconic Manitoba dlsh) wrapped in birch,” says Jonasson. “If you’ve ever eaten unsmoked goldeye, it’s unpalatable.” Aid from the First Nations helped the Icelanders go on to found Gimli’s great fishing community. Today, they export the mild, sweet-flesh walleye fish, colloquially known as pickerel, worldwide.The immigrants were determined to create a New Iceland. As a child growing up in Winnipeg, I learned in class that they formed their own republic, a myth later dispelled. But they penned their own constitution and lived by it for several years until the young Dominion of Canada began administering the area. Still, they certainly succeeded in creating a de facto New Iceland. Even today, Icelandic flags are everywhere, and homes and summer residences have Icelandic-blue name signs. Even non-Icelandic cottage owners, with names like the Greenbergs or the O’Neals, have joined in by putting up blue signs. Reciprocally, people in Iceland endearingly insist on calling people in this part of Manitoba Western Icelanders. The prime minister of Iceland makes a point of flying over for the Icelandic festival held in Gimli every August, which swells the town’s population to 50,000, most of them Icelandic diaspora visitors wearing t-shirts with names ending in -dóttir or -sson to advertise their Icelandic clan.Despite this strong connection, Gimli residents don’t live just like their peers in Iceland. At the New Iceland Heritage Museum, I stumble upon a young woman telling the sales clerk about her trouble finding vínarterta in Iceland. Like rúllupylsa, this multi-layered prune jam and cardamom cake is Icelandic, but much easier to find in parts of Canada: Every amma (grandma) in the region bakes vínarterta, and the museum gift shop sells a version from the excellent Sugar Me Cookie bakery in town. From rolled lamb flank to prune cake, New Iceland’s food culture feels trapped in amber, stuck at a point in time closer to their volcanic emigration than to modern Iceland.According to Laurie Bertram, a history professor at the University of Toronto and author of the upcoming book The Viking Immigrants: Icelandic North Americans, this disconnect is because the New Icelanders became something of a lost tribe. After World War II, Iceland entered into a long relationship with NATO and the U.S. that modernized the country very quickly. “We have this funny relationship with Iceland overseas, because in a way we don’t recognize each other,” Bertram explains. “They immigrated from that Iceland, an old Iceland.” 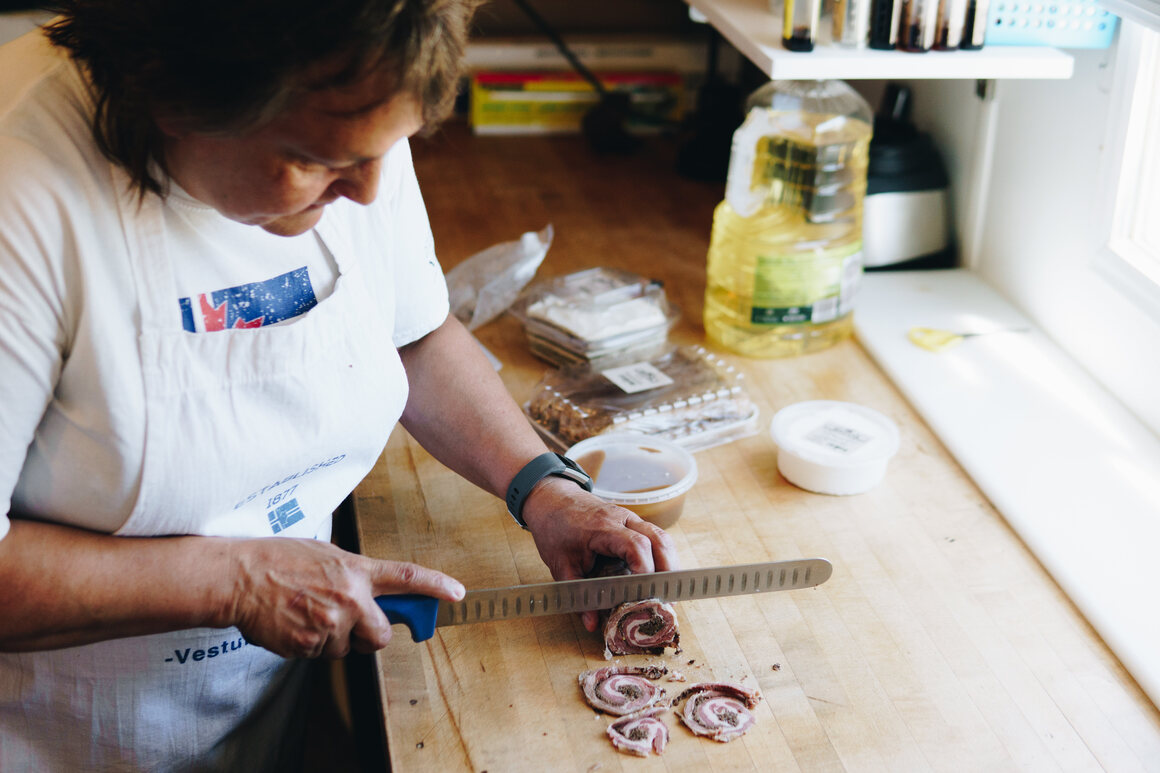 One chapter of Bertram’s book is devoted to vínarterta, which was the subject of her doctoral thesis. The cake was at the height of fashion, she says, in 1875, when the first wave of immigrants arrived to Lake Winnipeg (more recent arrivals included the “cash and ash” émigrés, named after a 2010 volcanic eruption and the Icelandic banking crisis), and that’s one reason why it’s such an important marker of culture in New Iceland. “For them, vínarterta, was a symbol of success, prosperity, and fashionability. It’s a survivor of that Iceland. That’s why it’s really taboo to, for example, try chocolate instead of prunes. That’s not what that’s for. It’s symbolic for having not changed.”Another way they refused to change? Coffee. Icelanders wouldn’t accept the tea that the dominant Anglo-Protestant society had made the norm. “Coffee was at the heart of Icelandic social life,” says Bertram. “So they started roasting their own beans, and they kind of changed the coffee market in Manitoba by creating a loyal and ferocious demand for coffee.” A few years ago, Bertram’s uncle, Nelson Gerrard, who raises Icelandic sheep in the area as a hobby, started a project to revive the homestead built by Sigtryggur Jónasson, as an information center for visiting Icelanders and a rural coffee house like those that dot Iceland’s countryside. He is funding the project through a line of Icelandic coffee he sells around town and online. “It’s such an Icelandic thing to do. To raise money to protect a heritage site through coffee,” Bertram says. 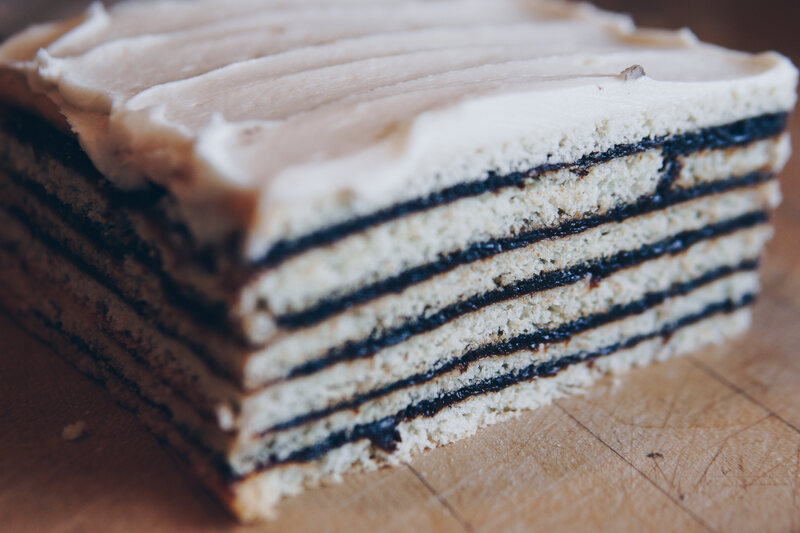 Back in the kitchen, Donna Austfjord, who is spooning out skyr and rolling out pönnukökur, tells me she is doing this for future generations, whose interest in Icelandic heritage seems as keyed up as ever—thanks in part to the popularity of Iceland as a travel destination, the Game of Thrones factor, and hip music acts such as Björk and Sigur Rós. Meanwhile, New Iceland is a growing curiosity for Icelanders, who are visiting in growing numbers.“There’s a definite link between us,” the Icelandic president, Guðni Jóhannesson, said on a recent visit to Gimli. It’s a love affair that Donna Austfjord and others around Gimli will keep feeding.Collage